A planning application has been submitted to Tunbridge Wells Borough Council that, if approved, would deliver a long-awaited relief road for Hawkhurst as well as new homes and community benefits.

Cedardrive Ltd has been involved with Hawkhurst Golf and Squash Club since 1972.

The professional team behind the project includes ETLA, a leading landscape-led architecture company based in Canterbury which has great experience of projects within Areas of Outstanding Natural Beauty and the Green Belt. It has helped drive the landscape-led masterplan.

Hollaway is a Kent-based architecture firm experienced in masterplanning contemporary and bespoke developments with a focus on design-led architecture.

Maidstone-based DHA is managing the project.

Cedardrive is proposing a development which would include:

The proposed scheme would be built on around 45 acres of land that is currently home to Hawkhurst Golf and Squash Club.

The golf clubhouse and two squash courts are at the southern end of the site, along with the main access from the A268. The rest of the land runs north alongside the A229 as far as Gills Green. 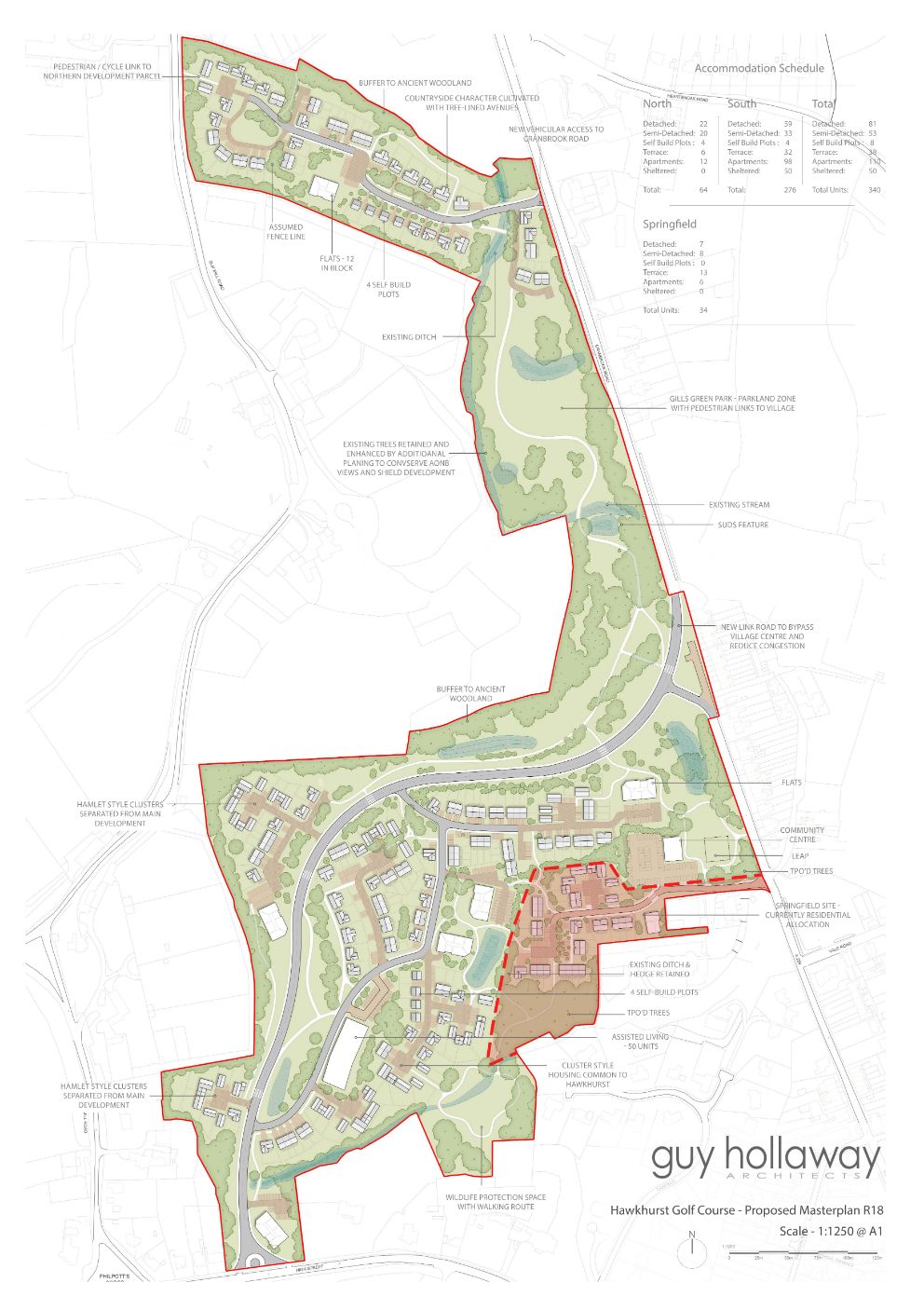 The new homes would be around a 10-minute walk from the centre of Hawkhurst and its shops and services.

The site offers a unique opportunity for Hawkhurst to meet its housing targets at a location that is at the heart of the village, rather than on surrounding farmland, and with little visual impact on the wider landscape.

Congestion in the centre of Hawkhurst caused by the traffic light-controlled Highgate junction of the A268 and A229 is a blight on the village.

A relief road to ease the pressure on the village centre has been discussed since theat least 1992, and all the while traffic through the crossroads has continued to grow significantly with ever lengthening queues on all approaches.

As part of our proposals, a relief road would be included which would link the A268 High Street with the A229 near Gills Green.

There are currently no other proposed relief road routes for Hawkhurst and no viable schemes to reduce congestion by altering the layout of the crossroads junction.

This would not only serve as access for residents of the new homes but would also divert a significant amount of through traffic away from the centre of the village, benefitting current residents as well as newcomers.

As all the land for this proposal is owned by Cedardrive, our proposals are the perfect opportunity to provide a significant piece of badly-needed local infrastructure that will benefit Hawkhurst as a whole. Being in single ownership means the proposals can be brought forward in an holistic and strategic way.

The road would be brought forward at an early stage, with the vast majority of its route able to be constructed with minimal disruption to existing traffic flows as the land for it lies entirely within our site.

It is important to stress that what is being proposed is a relief road, not a by-pass. While having sufficient capacity for HGVs and through traffic, it will be designed to be similar to a typical village road, having a single carriageway, 30mph speed limit, and appropriate lighting for pedestrian crossings and around junctions.

We are in discussions with the highways authority about how HGVs can be encouraged to use the relief road, with the closure of the Cranbrook Road arm of the Highgate crossroads helping with this.

Tunbridge Wells Borough Council has been set an ambitious housing target by the Government. This is a particular challenge for the borough when it comes to identifying suitable sites as more than three-quarters of the land within its boundaries lies within the Green Belt.

While all of Hawkhurst, including existing built up areas as well as the golf course land, is within the High Weald Area of Outstanding Natural Beauty, it falls outside of the Green Belt and will be set its own housing target by the borough council.

This site provides the opportunity to provide high-quality housing, close to existing village services, while making a significant contribution to meeting the new homes target. The Borough's need for housing cannot be met solely from developing smaller, brownfield or infilling plots.

Hawkhurst golf course is an under-used resource that has seen a significant decline in membership in recent years. It is a nine-hole course at a time when demand is for 18-hole courses.

The clubhouse building is dated and has limited space at ground floor level, making it challenging to host events suitable for the whole community. Such events could be better delivered within new community facilities.

There are more than 10 golf courses within a 15 mile radius of Hawkhurst, with a mix of 9, 18 and even 36 holes. For example, the highly-rated Dale Hill Golf Club and hotel has two full 18 hole courses, and is just four miles from Hawkhurst.

The land the golf course occupies lies outside of the Green Belt and while it falls within an Area of Outstanding Natural Beauty, it is not accessible to the general public.

The landform of the site has been profiled and engineered to create a golf course and is under management as a golf course. Therefore, while it sits within the context of an AONB landscape, internally the site lacks many of the sensitive features found within an AONB.

The natural contours of the land on which the golf club sits in combination with the established vegetation along its boundaries means that few existing homes
overlook the site and that views into it are relatively localised.

Our scheme proposes development that is sensitively sited within the site to reduce the visual impact as far as possible. The boundary vegetation provides an important screening function and is also a sensitive feature in ecological terms, and it will be retained as far as possible, with the exception of the site access points.

Our proposals include a substantial new country park to maintain the distinct gap between Hawkhurst and Gills Green. This will open up a green area not currently accessible to the public, to be designed in a natural way to make the most of the existing landscape features, including the pond and streams.

Our evolving scheme is a landscape led response to the environmental context of the site and its location within the AONB.

The scheme seeks to limit impacts on the AONB and create a strong landscape structure within which the new homes will be located, with substantial new opportunities for recreation, play and nature trails.

Our planning application is in two parts – a full and detailed application for the relief road and an outline one for the new homes.

We submitted the application to Tunbridge Wells Borough Council in July 2019.

Tunbridge Wells Borough Council is consulting on our application, providing local people with an opportunity to comment. To view the application documents and comment, visit www.tunbridgewells.gov.uk/
residents/planning and search for reference 19/02025/HYBRID.

If the application is approved we expect the further preparatory work required before work can start to take another 12 months.

If you would like any further information or wish to make a comment, please email us via the link below or write to us at:
Hawkhurst Relief Roads and Homes Project Office,
Grosvenor Lodge,
72 Grosvenor Road,
Tunbridge Wells,
Kent, TN1 2AZ